The 1970s, the decade the band were formed in. The fashion may have been for bell bottom flares and Platform shoes but while some were rocking along to Slade, The Osmonds and Wizard a small group of people had music of an altogether different kind in mind.

Picture on right - John (Jack) Lowry leads the band on parade in the mid 70's. Pipe Major Jimmy Whitelaw is on the far left front row.

1973
January 1973.The band is formed
The committee minutes of Feb 1973 record that the following office bearers are elected:
Chairman - Mr John W Kernaghan
Pipe Major - Mr James Whitelaw
Secretary - Mrs Doris Kernaghan
Treasurer - Mrs Ann Stuart
Other Committee members were Miss Karen Laurie, Mr John Lowry, Mr William Richmond, Mr John Simpson, Mr James Whitelaw, Mrs Lowry, Mr Leggate, Mrs Simpson and Mrs Whitelaw. The minutes also record that Sheriff Thomson was proposed as Pipe Band President.The minutes of the march meeting record that Sheriff Thomson declined due to pressures of his other commitments. The band is originally formed as Strathaven Pipe Band but the the name is amended to Strathaven and District Pipe Band after a motion proposed by Mrs Kernaghan is passed at the April 1973 committee meeting.
First committee decide that the band kilt will be the Ancient green Douglas and it still is today. A quote was given by Avon Textiless at £24 per kilt. 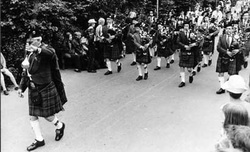 1976
May - As part of an twinning agreement between East Kilbride and Ballerup in Denmark the band accept an invitation to go to Ballerup. The minutes record the expected cost of taking the band over to Ballerup by coach and ferry as £1839.25 plus the cost of meals and accomodation for the two bus drivers. Strangely the minutes also record that enquires should be made to see if calor gas can be taken on the ferry!

1977
June - The pipe bands reciprocate the hospitality they received in Denmark and are hosts to the Ballerup Drum Band. The Danish band are shown around incluing visits to Edinburgh, Dunfermline, East Kilbride, Burns Cottage and Culzean castle over the weekend they are here.

1978
Jan - The pipe band make an audacious offer to purchase the old Scout Hall in Strathaven. However the terms offered by the Scout and Guide association could not be agreed to by the band and they withdraw their offer of £2000.
April - The pipe band take part in the Round Table sponsored Sir Harry Lauder Walk.
June - Crisis in the band as PM James Whitelaw threatens to resign and the committee are given a vote of no confidence. A new committee is elected and relative peace returns.