The 21st Century is well underway and the band are going strong. They get to play in a very unique surrounding, lead a march to commemorate a 700 year old battle, re-visit old friends in Lewis, perform at two international festivals, and smarten up their image with a new uniform.

Picture on the right shows some of the band as they perform inside one of the Kelpies at Falkirk. 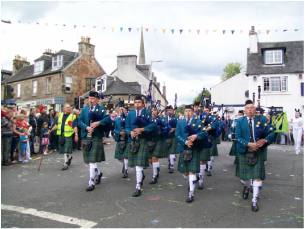 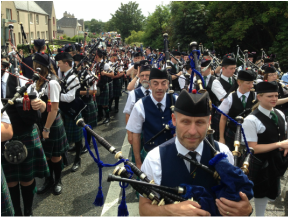 This was a big year for the band with the bulk of the year spent getting ready for taking part in the Tattoo Hebrides 2014 in Stornoway in the Isle of Lewis, in August. Prior to that though it was the usual busy season.
Things got underway in April with a performance specially for Peter Halliday at the Avonhaugh Care Home in Stonehouse. Peter spent many years teaching pipers in the band and the band play a couple of his compositions so it was great to be able to play a set for him and the other residents.
The first week in June saw the bands first formal gig of the season with the Central Scotland Amateur Football prize giving dinner at Colville Park in Motherwell. The band enjoyed an hour, in the sunshine, playing on the green in front of the venue. The following week was the Strathaven gala week. This is always a busy week for the band and this year was no different. Thursday and the band were playing at the Abbeyfield Nursing Home followed by some tea and their legendary home baking, which at always was greatly appreciated by the band. The gala was greeted with decent weather and as usual the band led the parade round the town. There was a number of gala debuts; Stuart drums, Ann and father and daughter Cliff and Hanna on pipes. Well done to them all. Due to too much water (and yes too much water) the Duck Race had been cancelled on Monday night and moved to the Sunday, so the band stepped out on the Sunday afternoon with one or two just looking a little fragile after 'gala night'.
One of the fund raising activities for the Stornoway trip was a bag pack and performance at Sainsbury's. So come 4 O'Clock, on the 20th of June, the band formed up inside and outside for a bit of playing and bag packing.
The following day was a big day for the band with the usual Deans gala parade followed this year by a impromptu flash-band performance at the recently opened Kelpies and then on to lead the parade to mark the 700th anniversary of the Battle of Banockburn. The gala went well with the band getting to play in sunshine for a change.  Our treasurer Norman Mort had suggested that on route to the Stirling Bannockburn march we should stop off at the new Kelpie structures in Falkirk. So it was that after taking every conceivable route to get there the band mustered in the car park for a quick tune up before wandering over to the huge steel horses heads. As the rest of the band hid round the back of one head, the PM, and young pipers Luke Kennedy and Hanna Jackson moved between the heads and struck up the first part of Highland Cathedral to the surprise of those in the park, very quickly a small crowd gathered before the rest of the band sauntered in to join in for the second part. As the crowd increased the band followed Highland Cathedral with a romp through the Scotland the Brave set. As the applause rang out at the finish the band were asked by one of the park team to come and play inside one of the Kelpies. The band streamed into the Kelpie and played the Leaving Nigg set while enjoying the superb acoustics inside  the steel heads. After that it was a mad dash to Stirling Bridge for the start of the Bannockburn march. Detours, roadworks and lack of parking made it all a bit tight but eventually everyone made it.  The march turned out to be an epic going from Stirling Bridge all the way to the Bannockburn centre and took nearly an hour and a half. There were some very weary lungs and legs and hands in the band at the end. 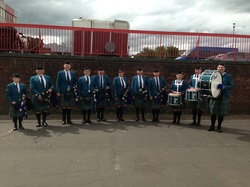 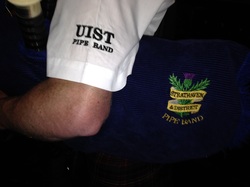 
The band were delighted to be invited back to Lewis for the 2014 Tattoo following on from their performance at the 2009 Tattoo Hebrides. Other pipe bands performing at the Tattoo were The Simon Fraser University PB from Canada, The Lewis PB, The Uist PB, Ullapool and District PB, The Skye PB, and Sgoil Lionacleit PB.
For more a detailed account see the Tattoo Hebrides page under History 10s.
The end of the year closes in traditional manner now with the Sanquhar Ridings, The Strathaven Show and the Remembrance Sunday parade. Following on from the remembrance parade the band returned to the Avonhaugh care Home for another performance for Peter Halliday and the other residents.