The new century begins with the band standing in water up to their ankles!

Picture on right - the band line up as part of the massed bands for the Tattoo Hebrides 2009. 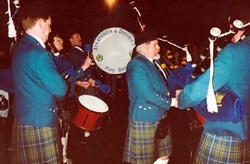 2000
Jan 1st  - The band play 'right after the bells' at the Strathaven Millennium Party held in the George Allen Park (Strathaven Park). The party was in the drained duck pond and thousands of people had gathered to celebrate the start of a new millennium. As the bells stopped PM Iain Tennant marched the band into the front of the crowd where there appeared to be a space the band could play in. As the band arrived the reason for the space became clear as they marched right into a puddle inches deep. Undeterred the band played on and received thunderous applause when they finished. Somehow, with all the celebrations (and the whisky) nobody noticed their wet feet.

Band take up an offer to play at the Schots Weekend piping festival in Alden Biesen. Over twenty bands from around europe competed in the picturesque setting of Alden Biesen castle. A Celtic flavour concert in a huge marquee caps the competition day.

Peter Halliday who has been selflessly giving up his time to teach the learners at the band for many years, has two of his compositions included in the new book of tunes by the Royal Scottish Pipe Band Association. The tunes include his excellent 4/4 Pipe Major Ian Tennant, composed for our current Pipe Major and played regularly by the band.

The band start the year playing at the wedding of long time band member Norman Mort and his finance Ennis. The reception took place at the Strathaven Hotel and the band for the night was, pipeband ceilidh regulars, Millreel. Needless to say it was a marvelous night.
June- A new gig this year as the band plays at the Quarter Gala Day. The march went well and all was set for a lovely afternoon in the main field until the rain came down with a vehemence not seen since biblical times. There was nothing for it but to head for the pub. Hopefully next year will be a little drier.
Aug - Some of the pipers from the band (Ian Tennent, Stewart Graham,Aly Menzies, Izzy, Chris MacKenzie, Ross, John Cox, Norman Mort, Davie Muircroft) take part in the Pipefest march in Edinburgh. Linking up with thousands of other pipers and drummers from all parts of the world was a fabulous experience and one none of those that went will ever forget. Izzy as more reason than most to remember it as it was her first outing with the band.
Sep - The highlight of the year has undoubtedly been the trip to Tiree. The band originally set out for three days in the lovely hebridian isle of Tiree however due to bad weather on the Monday the trip lasted five. Read a full account of the trip here.
Nov - The band ceilidh took place in the Strathaven Hotel (the first event in its newly refurbished hall) in November and was by common agreement a fantastic night. The band were (as is now almost a tradition) Millreel who were in excellent form. There was even a rendition of the Tiree Rover by Steve, Aly and Chris to revive memories of Tiree.
Dec - To round of the year the band play at the switching on of the Stonehouse Christmas lights. 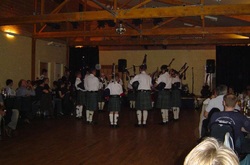 A number of the band take up the offer to play as part of the massed band at Murrayfield for the Scotland rugby team home internationals against France and England. Despite it being bitterly cold for both games and it being a long day for the band members as they have to arrive well ahead of the fans for rehearsals, those participating had a fabulous time. The occasion was even more memorable as Scotland won both games. After the England game some of the pipers (Chris, Steve, Ali, Davie M) marched back down Corstorphine road and up to the Grassmarket where they met up with those that had come through to watch the game. As always there was a great atmosphere in the Grassmarket and the pipers were in great demand to play.
The band play the Quarter gala day and this year the rain stays away.
For the Strathaven Gala day this year the Tiree Pipe Band have accepted our invitation to attend. The band takes part in the parade which is a big kick for them as they don't get the chance to participate in parades in Tiree. A ceilidh was held in the Ballgreen hall on the Saturday evening with both the Tiree and Strathaven bands in attendance.

Everyone in Strathaven is saddened with the death of Adam Law. Adam, commonly known as Mr Strathaven, was a keen supporter of the band. For many years he was the owner of the SpringVale Hotel in Strathaven and every Gala day the band would play Auld Adam as it passed the Hotel much to Adam's delight. The band attend his funeral. The biggest funeral the town has seen in living memory and as Adam's coffin is taken out of the church the band play Auld Adam in tribute.

Once again the band takes up the Tiree band's invitation to the beautiful isle. This time the weather in contrast to last year the weather is great. The downside of that is the band only get to stay for the planned three days! Picture above shows the band playing at the ceilidh in the Tiree village hall. Read a full account of the trip here.

The band ceilidh took place in the Strathaven Hotel in November and was as usual a terrific night. The band was Millreel who were in excellent form.

Late in the year everyone in the band is saddened to hear of the death of former band member Norman Allen. Norman played with the band for a number of years as well as being PM of the Cambuslang PB. The band is also saddened to hear of the death of Thomas Stern a well known person within Strathaven and someone who always appreciated hearing the band play. He also loved, and always attended, the annual PB ceilidh.

The last gig of the year is usually the switching on of the Stonehouse Christmas lights however due to the vile weather the event is cancelled.


After a stint of around fifteen years Iain Tennent decides to step down as Pipe Major of the band. As he is retiring from employment later in the year Iain wants to have a little more time to devote to interests other than the band (could that be golf !!). Iain formally steps down at the AGM in February and Chris Mackenzie is given the onerous task of trying to live up to the high standards set by Iain. The AGM also sees some changes on the committee Carol Crawford takes over as Secretary and Peter Smith takes on the Social Secretary role.

Iain’s contribution to the band over the last twenty six years (he joined in 1981) has been immense and in order to recognise this Stewart Graham presents a look over Iain’s life at a band practice and Iain is presented with a large framed picture of the band and a wooden McCallum presentation practice chanter with a silver shield inscribed with - Iain Tennent, Strathaven and District Pipe Band, Foxtrot Oscar. Foxtrot Oscar is of course Iain’s catch phrase and one we have all heard many times over the years.

As the playing calendar for the year is being collated there is some bad news as the galas in both Chapleton and Quarter are cancelled due to problems raising committees. It is a shame that while everyone enjoys the gala’s very few people are prepared to commit to helping organize them.

The cancellation of Chapleton means that the bands first outing of the season is at the Strathaven gala. The Tiree pipe band have come down to the gala again this year and are again based in the Shawlands Hotel. After a relatively quiet night on the Friday night the Tiree band met the Strathaven band  in Strathaven on the Saturday morning and the two bands play for around half an hour prior in the Common Green (in front of the bank of Scotland). This goes down well and a sizeable crowd forms to listen. After that it is on with the parade and as the sun shines it is another fabulous gala. The bands repair to the Bucks Head for some lunch and some much needed re-hydration.  Later that night there is a ceilidh in the Ballgreen hall with Millreel doing the honours (helped out of course by the Tiree band who it often appears can all play the box).

Despite losing the two early gigs the band have a very full calendar. Along with the regular Ferneigair, East Kilbride, and Strathaven Agricultural Shows the band also play at the Whitburn gala. This is a large Gala day (even bigger than Strathaven’s) and with a parade route that takes around an hour it is ‘guid blaw’ and both pipers and drummers are flagging a little at the parade end. Another first for the band is playing at the Newmiln’s gala. The gala committee who were looking for a band, at very short notice (ie two days before), got in touch and despite the short notice we managed to field a band (albeit a slightly smaller one than usual – six pipers one tenor and two snares).  The band also play at the Strathaven Striders 10K race in November and at a Santa dash (5K) in Greenock in December.

For many of the band members the standout gig of the year was playing at the wedding of Canadian couple Les Hutchison (who is originally from Uddingston) and Virginia Shaw at Stirling Castle. The band arrived at the Castle about half past four and started to tune up on the esplanade. Within seconds a large crowd of tourists had gathered round as the band tuned up and ran through some sets. After the castle was closed to visitors at five the guests arrived in buses. The band formed up in front of the main gate facing down the esplanade and looking directly at the wedding guests. On the command from the PM the band struck up, countered marched and began marching through to the main gate and up to the main quadrangle with the guests following on behind. Once in the quadrangle the band played for about twenty minutes until the bride and groom arrived. That just left one last thing to do as agreed with the wedding organizer John Blue. Once all the guests had gone into the main hall the Pipe Major piped in the top table. As everyone stood to see David Miller pipe in the Bride and Groom the PM opened a door at the back of the hall and let the band in. David was playing Highland Cathedral and as he started the second part the whole band kicked in to the astonishment (and delight) of those in the hall as they hadn’t noticed the band coming in. It was said afterwards that there wasn’t ‘a dry eye in the house’. 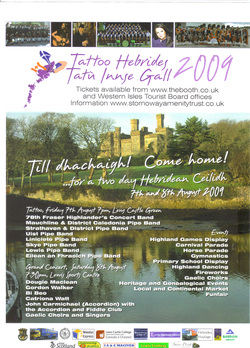 Aug - The band take part in the Tattoo Hebrides in Stornoway alongside the 78th Fraser Highlanders, PB Mauchline and District PB, The Scots Guards TA, PB The Lewis PB, Eilean a Fraich PB., The Skye PB, and the Uist PB.