As the century draws to a close the band are still going strong and taking part in one of the biggest gatherings of pipers and drummers ever seen.

Picture on right shows some of the Marie Curie parade marching down Princess Street. 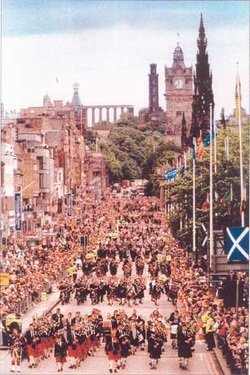 The band play in the Marie Curie march of 10000 pipers in Edinburgh.
A career highlight for many of the band members was the march down Edinburgh’s' famous Princess Street. Each side was packed with spectators and the atmosphere was incredible. As the parade disgorged it's participants into the Grassmarket, an impromptu ceilidh started as pipers and drummers formed a massed band hundreds strong. As each player tired they nipped into the nearest pub for light refreshment and were soon out playing again. What the passing tourists made of it who knows.

Dec - The band joins hundreds of other pipers and drummers as they march down the Royal Mile in Edinburgh. This evening parade had thousands of people lining the royal mile to watch and despite being bitterly cold was thoroughly enjoyed by all the band members...even those who had dry ice squirted up their kilt courtesy of one of the TV stations covering the event!